BERGEN, Norway — Alibaba Group is looking to build relationships with more seafood suppliers globally, in order to bring more live, fresh and frozen seafood to the giant and growing Chinese market, said a senior executive of the company at the North Atlantic Seafood Forum (NASF).

J. Michael Evans, a Canadian tasked with leading Alibaba’s business outside of China, is looking to forge more direct links with seafood suppliers and will be a “major player” in the industry, he told the audience at the 2018 NASF in Bergen, Norway on March 7.

Earlier in the day, Roy Angelvik — Norway’s deputy fisheries minister — said the free trade agreement with China is a “key priority” for 2018. This comes after the settling of diplomatic relations with Norway and China, after a controversy around the awarding of the Nobel peace prize to a dissident Chinese artist. As reported by Undercurrent Newsearlier in the week, Norwegian salmon sales to China are already on the increase in 2018.

“In the future, we see ourselves selling hundreds and thousand of lobsters and salmon on the [Alibaba online] platform. We will be a major participant in the seafood industry,” said Evans.

Also, Alibaba — founded in 1991 by Jack Ma with only $50,000 — wants to work directly with companies that have strong sustainability policies.

“If we work with people who don’t care about this [sustainability] we will be part of the problem and not the solution,” he said.

The Chinese consumer is also becoming more interested in sustainability and traceability. All of the products in Alibaba’s new Hema “offline” retail stories have a bar code that can be scanned with the company’s app in order to get information on provenance.

Also, the company is selling big volumes of seafood through its online sales platforms, such as Tmall.

Part of Evans’ reason for visiting Norway is to meet with seafood suppliers, but the company is also looking worldwide for supplies to partner with, he said.

“We want to work together and we’re starting to develop some relationships.”

The company is also approaching seafood suppliers in markets all over the world, including the US, Canada, Latin America and Europe, said Evans.

On its online platforms, suppliers can either supply Alibaba, which then handles the sales, or they can set up their own online store. The latter option is more suitable for larger companies with brands looking to go direct to consumers, he said.

Alibaba has a plethora of businesses, including online and offline retail, media, payment and financial services, marketing and cloud computing.

The driver of it all, however, is making buying easier for the customer and also helping small businesses, said Evans.

“People often ask me, why is it so complex? The answer is the consumer. The consumers have many choices. Most consumers don’t do the same thing and want to do different things,” he said.

Alibaba wants to be able to serve a consumer if they want to order online and pickup in-store, or have the products delivered to work or home, or even have their meal cooked in one of the company’s Hema stores.

“A lot of what we are building is designed to deliver the consumer an opportunity,” he said.

Hema, where consumers shop using an app and can eat in-store, is the “merger of online and offline” retail, he said.

Evans presented a series of slides on the size and growth potential of the China market.

There are changes in consumer appetites and an interest in fresh food and things outside of China, he said. This is “going to be significant in the future” for seafood and other industries.

Also, more and more Chinese are using their phones to shop for seafood and other products.

According to Evans, 90% of transactions on the platform are done on a mobile phone. “Five years ago, it was less than 20%. Even we have been surprised” by the speed things are moving, he said. Alibaba also sees that 90% moving close to 100% in the next few years.

The users of Alibaba and rivals like JD.com are young and “emboldened”, he said. 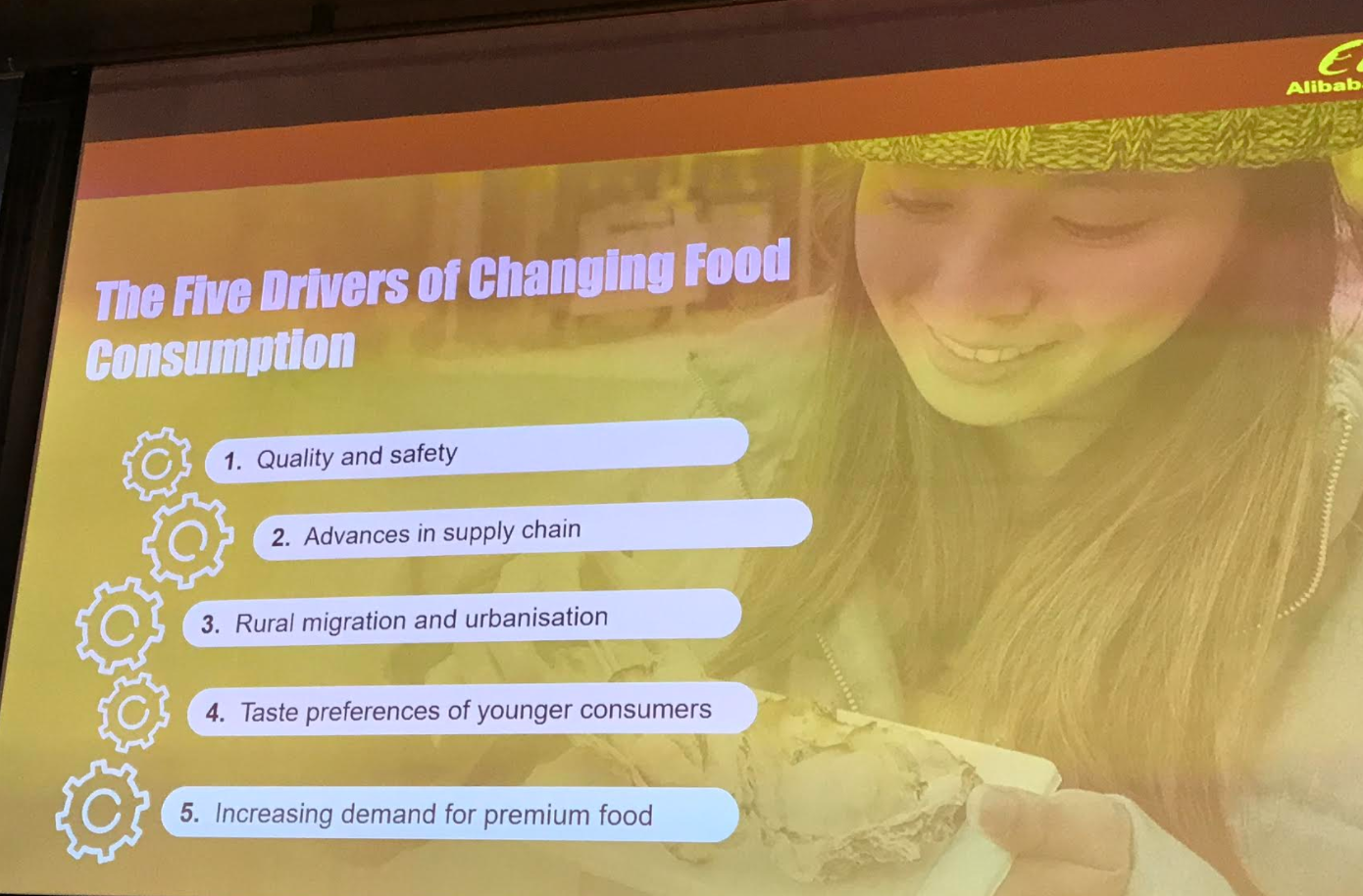 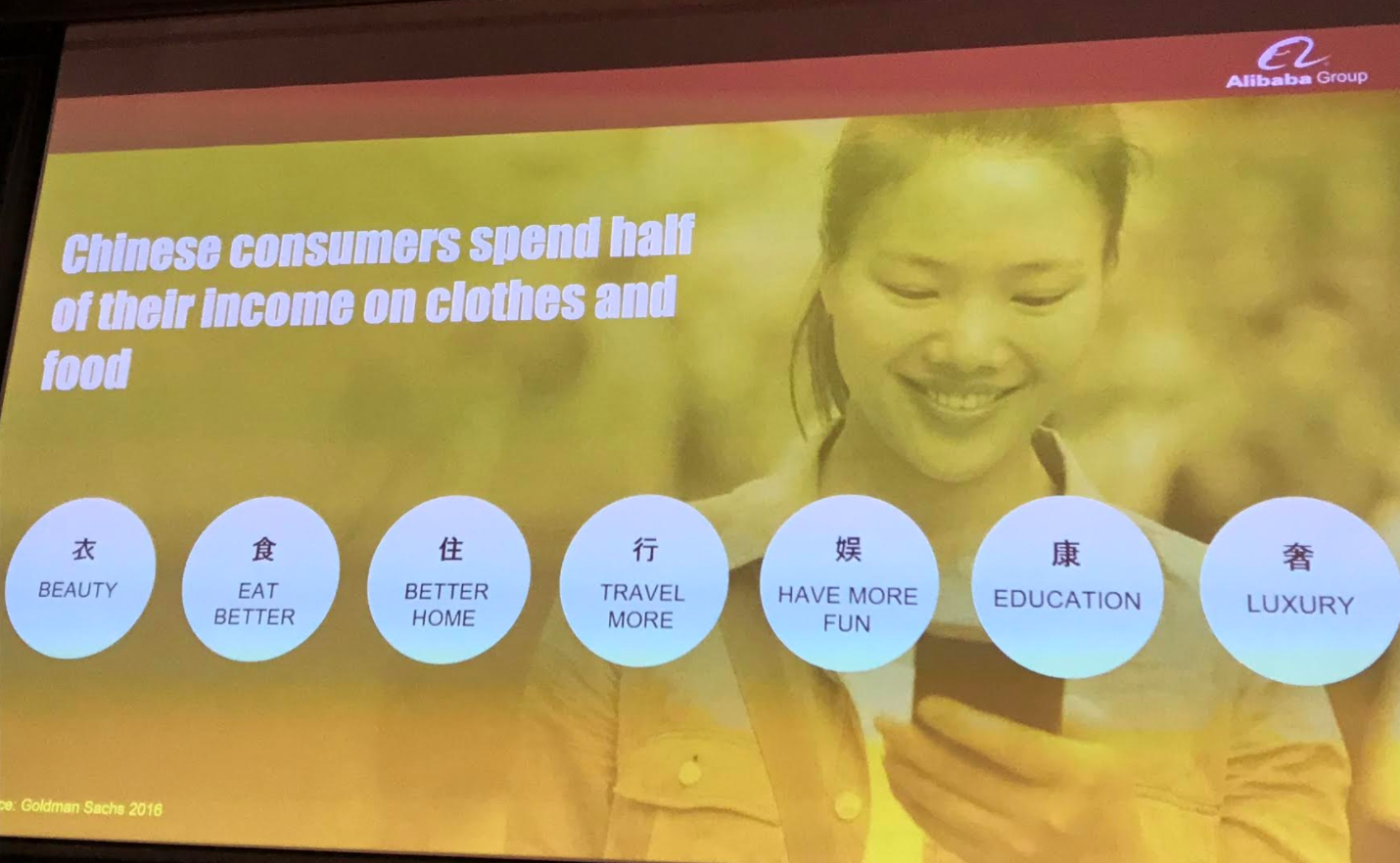 More and more are traveling overseas and then are coming back to China and spreading the word on what they have seen, bought and eaten, through social media, he said.

“Around 135 million leave China to travel around the world. They go back to China and talk to friends online about that experience,” said Evans.

Also, Chinese have large savings, as education, pensions and healthcare were not widely provided as the company was growing.

“Now, as those services are provided, the Chinese consumer is starting to draw down on savings,” said Evans.

Also, the urbanization of China, which will see the country have 200 cities with more than a million people in the next few years, supports the development of Alibaba’s model, said Evans.

These expanding urban centers mean “logistics and supply chain is easier, convenience to serve [consumers] is easier”, he said.