BOSTON, Massachusetts, US — At the Seafood Expo North America, where buying and selling of seafood takes place on a massive scale, Vicky Ma casts an envious glance at companies from North America and Europe, whose exhibitor stands tower over those from Latin America and Asia.

It is not their size which impresses — Ma’s own stand is big for a company which has turned up just to buy seafood — but their history, Ma tells Undercurrent News.

Tales of company founders who first hauled up a lobster trap over a hundred years ago and began a fishing dynasty, or a trader who sold squid from a cart in New Jersey in the 1960s and 1970s, and whose son now imports cephalopods from all over the world, are beguiling.

“In China there are not many companies which have been in the seafood sector for 30 years,” said Ma. “We are very envious of those 100-year-old companies in North America and Europe. We also hope one day to celebrate 100 years, have a brand with 100 years of history.”

Her firm — Beijing-based Sunkfa Group — is well positioned to fulfill its goal.

Last year, China imported well over a $1 billion worth of lobster (all species). Meanwhile, China is tipped to become a future salmon consumption giant.

The firm’s import share of frozen salmon can reach 10-15%, said Ma. Chile supplies close to 100% of the frozen salmon market in China.

After lobster comes crab, said Ma, another Chinese favorite, including brown crabs from the UK and France. Sunkfa accounts for 30% of the crab market in Beijing and the country’s north, and around 25% of the market in Shanghai and Guangzhou, she said. It has also done “very well” importing Dungeness crabs from the US and Canada.

Two other crab species — king crab and champagne crab, from Russia and Australia respectively — are also mostly imported by the firm. “If you eat these crabs in China, there’s a very good chance you’ve eaten those supplied by our company,” said Ma, although recent global production has been “very low and prices are rising fast”.

In 2016, the firm accounted for 50% of China’s imports of Chile’s king crab volume, she said. “At that time, the Chilean embassy in China invited our boss to talk because we imported three products from Chile and accounted for a very large share. We still make a relatively large contribution to Chile’s economy.”

She said Sunkfa now has several frozen products with which it has “influence in the market”: frozen Canadian lobster, green mussels, Chilean king crab and frozen salmon. 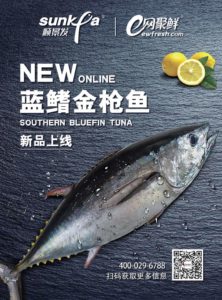 Sunkfa also sells locally-produced turbot, carp, greasy-back shrimp, and baby abalone. In 2017, baby abalone was one of its most popular domestically-produced products. “We’ve done pretty well with this,” she said. It also recently launched sales of South Pacific bluefin tuna.

It is a big transformation for the firm considering its roots, Ma muses.

Established in 1989, Sunkfa started out transporting seafood from the country’s aquaculture and fishing hub in the south, to the country’s north. “It was the first time people from the north could eat these sort of things. Not just beef, pork, and chicken,” said Ma, who is herself from north China.

Today foreign companies come to Sunkfa to help get licenses to export to China.

Ma said Sunkfa’s strong growth is owing to its relative experience in the business and well-established distribution networks. In China’s sprawling market, it knows its way around. 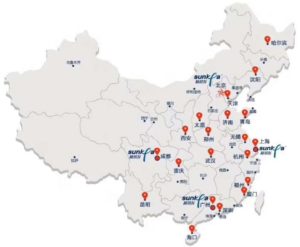 The firm has also focused on supplying the wholesale market, which still handles the vast majority of imported seafood sales in China.

In 2016, Sunkfa also established its own B2B online seafood marketplace called “ewfresh”. It also has a processing plant in Dalian, which opened in 2015. The plant produces salmon steaks, portions and fillets for the domestic market, sold under its own brand. At an R&D center in Beijing, Sunkfa develops new products for China’s growing middle-class. 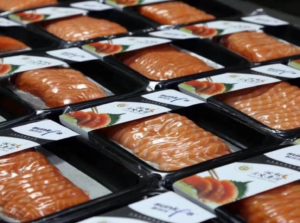 The firm still deals mainly with wholesalers, Ma said. However, it also does some direct sales to hotel-type customers and retailers, including Hema — the Alibaba-owned stores — and Yonghui Superstores — a large retailer which recently invested $85 million in Chinese shrimp company Zhanjiang Guolian Aquatic Products. Sunkfa does not presently sell directly to Chinese consumers. “Businesses have their business channels, we want to leave some space for our [wholesale] customers,” said Ma.

“We have been professionally and carefully managed,” said Ma. “When China allowed private companies to import from the 1990s onwards, we were the early bird to catch the worm. We have been doing this ever since.”

One industry source in China described Sunkfa’s market strategy to Undercurrent as “very aggressive”. But, while Sunkfa has clearly profited from China’s surging seafood imports, the firm could now face its reckoning.

Yet Ma is unfazed by the challenge. She points out that Alibaba and JD mainly do B-2-C, whereas in China seafood is still largely consumed in hotels and restaurants, which are supplied by wholesalers.

The firm also has its own plans. Last year it spent “a huge amount of money” on an enterprise resource planning system for the entire group. On her phone, Ma draws up a wealth of data relating to the firm’s sales, profit margin, seafood pricing, including by species and regions, displayed in slick charts and graphs.

“We try to rely on science and technology to do analysis. I believe we are ahead of most Chinese seafood companies in this respect.”

Other plans for 2018 include technological advancement — “online sales are the future in China,” she said — and centralizing the firm’s distribution networks around Zhengzhou, a hub for air cargo in and out of China.

It is no secret China has a problem with seafood smuggling, also known as the ‘grey trade’, particularly through Vietnam and Hong Kong. Legitimate importers complain they’re undercut by this illicit trade because smugglers don’t pay Chinese customs duties and import inferior products.

Indeed, Sunkfa has also suffered at the hands of the ‘grey trade’. In the past, it was one of five companies which imported Greenland halibut.

“We originally did a great job with this product. But for a company like ours, which reliably pays import duties, which for [Greenland halibut] is 5%, plus value added tax of 13% [prior to a reduction in VAT rates in last July to 11%], we had to pay duties of 18%. So for every CNY 100 we paid CNY 18 in duties.”

“They [smugglers] didn’t pay it. They certainly had to cover other small expenses, but it’s very small,” she said.

As a result, the firm “had no choice but to stop doing this product”, said Ma. “For those who use legitimate channels it’s extremely unfair.”

Hence, the firm makes a conscious effort to source as much seafood from countries with free trade agreements, such as New Zealand, Australia, and Chile, “so we have no obvious disadvantage compared with informal channels”.

But Ma reckons the writing is on the wall for smugglers.

The Chinese government is “cracking down”, she said. “Every year there are arrests. It’s very risky.” Furthermore, because imports are not subject to Chinese veterinary and food safety inspection, importers using informal channels cannot guarantee quality, she added.

China directly imported $7.1bn of seafood (everything under HS code 03, not including fishmeal, fish oil or canned fish) in 2017 from top-20 origins, according to Chinese customs. Although a large portion was re-exported after being processed in Chinese factories, increasing quantities are being consumed in the country.

Top-three origins were Russia, the US and Canada.