Chinese consumption of Norwegian cod up 500%, with more to come

Chinese consumption of Norwegian cod has increased 500% since 2014, when the Norwegian Seafood Council (NSC) began working to promote the whitefish there, it said.

New research suggests consumption has risen from 1,000 metric tons in 2014 to 5,000t in 2019. There is plenty of opportunity to increase this further, NSC added, stating it has put money into a number of activities designed to promote cod in China. 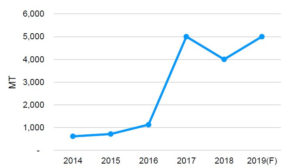 “China has traditionally been, and is still, a market for processing and the re-export of Norwegian cod, but five times [growth] shows that there is potential for further growth in Chinese consumption,” said NSC’s delegate in China, Victoria Braathen.

“Specifically, cod is considered a healthy product, while cod from Norway has a strong position among Chinese consumers. According to the report, this is a combination that can be utilized in marketing efforts going forward.”

NSC estimates the Chinese market for Atlantic cod amounts to 118,000t, though in 2018 Chinese people ate only 4,000t. The rest was processed and re-exported. For cod consumed within China, Norway holds a 50% market share, followed by Iceland and Russia, said NSC.

Half of the total is eaten in restaurants, 25% sold by retailers, and 25% bought online.

It launched a new range of cod products aimed at the “modern Chinese consumer” this year at China Fisheries & Seafood Expo.

The range is designed for quick microwave cooking. Three of the seven products in the new range consist of Norwegian cod, with different flavors including French-style, Italian, and “Norwegian natural”. During the fair, the product range was awarded the prize for “the most innovative seafood product”.

“We have made a series of seven products that are adapted to urban Chinese people on the move,” said Tasha Presto-He, Leroy key account manager. “They have little time for cooking, and are also concerned with health and quality. All dishes are quick and easy to make, and in addition they are healthy and taste good.”

Cod is also paving the way for other Norwegian species in China, said NSC.

“Norway as a seafood nation has a strong position in China. The development we are now seeing in the market, the positive synergies between investment in several areas mean great potential for several new species and products,” said Braathen.

Recently, Coldwater Prawns of Norway, for example, signed a partnership with a local partner in China, and launched its new products aimed at children at the recent Chinese show. 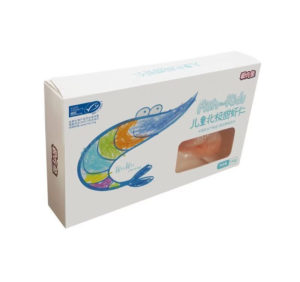 The product consists of three vacuum-packed bags of cooked-and-peeled shrimp, which can either be eaten immediately after thawing or included as an ingredient in various dishes for children.

Trond Gulbrandsen, of Coldwater Prawns of Norway, said Chinese consumers are increasingly appreciative of wild-caught shrimp, for its qualities including health and taste.