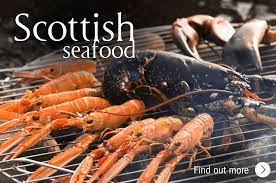 The British government has launched a campaign to promote Scottish seafood in China. The campaign is being led by the British Consulate-General Shanghai and Scottish Development International. It aims to promote Scottish seafood in Shanghai through a series of events, including a VIP dinner and a special Scottish menu week at the city’s high-end restaurants and hotels between April and June.

“Through this campaign, we hope very much that the domestic traders, seafood buyers in the foodservice industry and consumers will get acquainted or reacquainted with high quality Scottish seafood and have a better understanding, and above all, enjoy great taste and flavors,” Chris Wood, the British Shanghai consul-general said at the promotion campaign launch event in Shanghai on Monday, April 26.

Scotland produces over 540,000 metric tons of seafood yearly, 80% of which is consumed outside the UK, including in China. Scottish salmon is the top species for exports, while over two-thirds of the world’s langoustines are sourced in Scotland, said Wood.

He added the promotional campaign would raise the profile of Scottish seafood in the Chinese market after a very challenging year for food exporters with the impact of COVID.

As part of the campaign, the UK’s Department of International Trade (DIT) signed an agreement with the Marine Stewardship Council to promote sustainable seafood in China.

The two parties hosted a webinar to help Scottish seafood companies explore opportunities for sales and distribution in China and a business-to-business showcase and tasting event to boost awareness of Scottish seafood among Chinese industry stakeholders.

“Chinese people have a very strong appetite for Scottish seafood as they appreciate the high quality and provenance of our products,” said Adam Wing, Seafood Scotland’s head of trade marketing for Europe and Asia.

“So it’s important that after a challenging year of COVID restrictions, Scottish companies are fully armed with everything they need to build upon existing relationships and nurture new ones as we emerge from the pandemic,” he added.

The COVID crisis had a damaging effect on the global seafood industry. In China, consumers lost confidence in imported seafood after traces of coronavirus were repeatedly detected on the outer packaging of frozen seafood products, leading the authorities to impose tough port restrictions to prevent the virus from spreading.

Since last fall, SSPO has been working closely with the UK’s department for environment, food and rural affairs (Defra) on plans for a marketing campaign to improve Scottish farmed salmon’s reputation and boost sales in the Chinese market.

“The Defra-led ‘Food is GREAT’ campaign is working in partnership with DIT and in collaboration with Seafood Scotland and Scottish Development International to support Scottish salmon and seafood in China,” Hamish Macdonell, SSPO’s director of strategic engagement, told Undercurrent News last October.